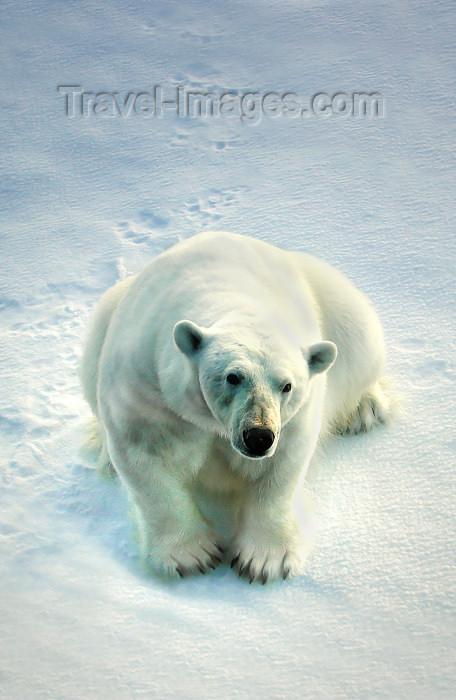 I lit a match and saw that he was dead.
It was sad to lay there beside the body.
Maybe I can survive. Life is dear to me, if I
Dont make it, Ill still know that I have done
What I can to survive

Theres a mysterious, fog-enshrouded group of islands between the arctic icecap and 80 degrees north latitude that have captured the imagination of adventurers for the past 130 years. This wondrously frigid place of exquisite arctic beauty and misty solitude is so removed from the rest of the world that many people in the Western hemisphere have never heard of it. In fact only the extreme tips of northern Greenland and Canadas Elsmere Island are farther north.

Its called Franz Josef Land, and it was actually the last major land mass on earth to be discovered. That happened in 1873, when an Austrian research vessel accidentally bumped into one of the 191 islands that comprise the remote archipelago. Not surprisingly, it was named after the reigning king of Austria at the time.

During the late 1800s and early 1900s, when the race to the North Pole was on, Franz Josef Land became a popular jumping off point for those attempting to reach the pole some 540 miles away. The remains of many of these explorers huts and, in many cases, their gravesites can still be seen.

Some were more fortunate: Two Norwegians wintered on Jackson Island in 1895- 96 in a small, self-constructed wooden hut with little food save for few polar bears and walruses they managed to hunt in perpetual darkness and in temperatures reaching minus 50 degrees. Their attempt to reach the pole in the summer of 1896 failed, but both men survived. At the time, hardship was the norm and the possibility of death was not unanticipated.

Even though the pole was finally conquered in 1909, Franz Josef Land continued to serve as an on-the-way to the pole reconnoitering stop. Through an international treaty of 1928, the islands were ceded to Russia, whereupon they were promptly closed to all foreign travel for the next 62 years until 1990.

Today, in a world in which no destination is too far out of the way fro some tour operators, pleasure sightseeing cruises can be taken to this fascinating, if not inhospitable, part of the world.

The only time of the year when such voyages are possible is during the months of July and August when the sea ice is broken up enough to allow ships with reinforced hulls to navigate the narrow straits and channels between islands. Even in these tow mid-summer months, enough ice still clogs the waterways to discourage less equipped ships. The entire region is frozen stiff, unnavigable and virtually impenetrable the rest of the year.

For just the past two seasons, the Russian ice breaker Kapitan Dranitsyn, a government-owned vessel that is leased by Poseidon Arctic Adventures of Moscow, has been taking up to 100 modern-day adventurers on 12-day cruises that are scheduled fives times per year. Its currently the only ship that explores these waters, and I managed to book passage on the fourth of its five scheduled for the summer, which departed from the port of Kikenes in northern Norway, right next to the Russian border. 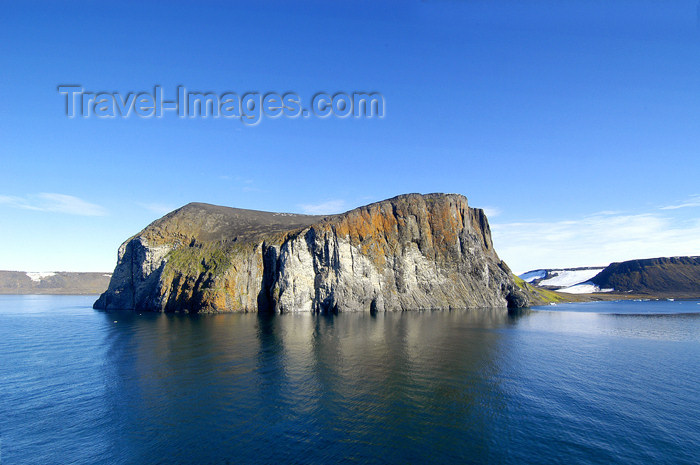 Unlike some of its predecessors, the notorious spartan Russian ice trawlers, the Kapitan Dranitsyn was refurbished in the mid 1990s and is now fully equipped to offer pleasure cruising with first class amenities to some of the worlds coldest and most extreme destinations. In addition to a fleet of inflatable rubber zodiac motorboats, with which to ferry passengers back and forth to landing sites, the ship also boasts a pair of six-person helicopters for aerial landings when ice conditions prevent the use of zodiacs. However, even the choppers can be grounded when the fog, which is prevalent during the summer months, becomes too thick.

Except for a few Russian army border guards, Franz Josef Land is totally uninhabited and shore excursions revolve around wildlife, the historic sites of explorers and spectacular arctic scenery.

One of the most compelling reasons for a trip to Franz Josef Land is the opportunity to see wild polar bears  some of which come right up to the side of the ship on the pack ice. Indeed, a polar bear sighting is an event unto itself. The ship comes to a halt and all passengers flock to the open decks, where the polar bear is furiously photographed for the next 20  30 minutes as it ambles from iceberg to iceberg, curiously inspecting the intruding ship.

While polar bears can be viewed safely from aboard the ship, as close as 20 feet away in some cases, encounters on land excursions are another matter. Before each landing, the area is scoured for wandering bears, and rifle-toting crewmembers accompany the landing parties in case a bear with an empty stomach happens to appear.

Other arctic denizens who enjoy similar photographic attention are the walruses, which unlike vagabond polar bears, are usually seen drifting on the pack ice, snorting and grunting in pods of several dozen. Walruses, too, must be approached with caution especially by the zodiacs, one of which, I learned, had ventured too close and been punctured by a tusk on the cruise just prior to mine.

Even though the Franz Josef Land archipelago is 85% glaciated, each of the islands is unique around their mostly ice-free shorelines and the Kapitan Dranitsyn makes an attempt to land at some of the interesting ones.

On Champ Island, in the geographic center of the archipelago, the attraction is the curiously spherical rocks and boulders, which were created from the nearby glacier by a geologic process that has been identified in only two other parts of the world.

The landmarks that are becoming the signature symbol of Franz Josef Land are the two enormous yet-to-be-named rock spires at Cape Tegetthoff on Hall Island.

Its also along the coastline that the decrepit remains of the huts and camps of the early explorers are seen. Some of these contain little more than a few remaining timbers and a gravesite, while others are dotted with still-standing wooden structures bleached grays-white by the severe arctic weather. One deserted Russian research station at Thickaya Bay on Hooker Island resembles a ghost town, the grounds of which are strewn with a variety of items in various stages of decomposition including rusty oil drums, abandoned machinery, cooking utensils, personal effects and other provisions left when the base was hastily evacuated in 1990 after the collapse of the Soviet Union. Each building on Hooker Island is searched before tourists arrive to make sure they are free of polar bears  now the only occasional overnight guests.

For all the beauty, history and wildlife to be enjoyed in Franz Josef Land, travel here does pose one particular drawback. The sun never sets during the entire summer. Its as bright at 3:00 a.m. as it is at 3:00 p.m. In addition to the perpetual daylight, ones sleep is constantly being interrupted and further disturbed by the most horrendous shudders and vibrations as the ship, crashing through stretches of pack ice up to five feet thick, is thrown into violent convulsions.

Even though for the time being Franz Josef Land can be experienced by as many as 500 tourists per year, the islands, because of political turmoil and their relative inaccessibility, have undergone long, dormant periods of visitation since their discovery. Travel to this arctic