South Africa: The Mother of All Bungy Jumps
by Bill Cain 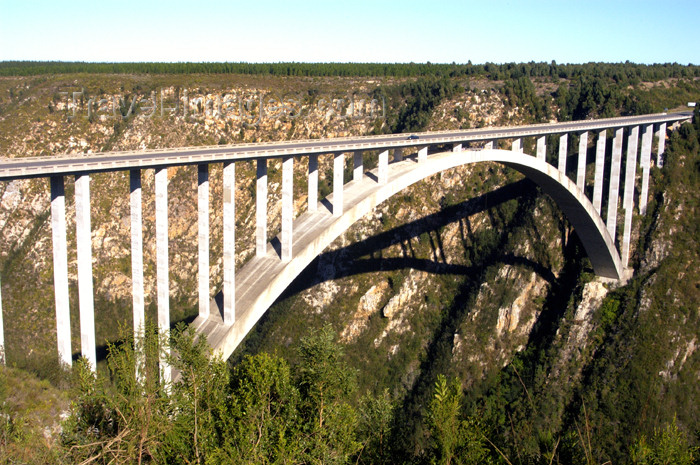 Sometimes if you stand on the bottom rail of a bridge
and lean over to watch the river slipping slowly away
beneath you, you will suddenly know everything there
is to be known.

- Poohs Little Instruction Book
Just to put things in proper perspective, the John Hancock Tower in the city of Boston is the only skyscraper in New England that reaches over 669 feet in the air. The Pru, its antenna spire excluded, comes up over a dozen floors short. Yet, there are some people, myself included, who have leapt from this height attached to nothing more than a thick rubber bungy cord and are happy to tell about it.

Located on whats called the Garden Route on the South African coast  a 110-mile long zone loaded with a variety of thrill activities  the Bloukrans Bridge spans a gorge and a river by the same name, the mere sight of which can start the pulse racing. An imposing engineering marvel that glistens white in the morning sun, its the highest bridge in Africa and 15th overall in the world. Like most bungy venues, the bridges original purpose had nothing to do with bungy jumping. Its reason for construction from 1980 to 1983 was to facilitate the smooth continuation of the N2 highway, the regions main thoroughfare. The bungy idea came along about eight years ago and was added on inconspicuously just underneath the roadway. It is worth noting that not only were no lives lost during the bridges construction, but the same unblemished record continues to this day with Face Adrenalin, the commercial bungy operation here. Drivers on the N2 would be none the wiser that large amounts of adrenaline are being pumped below them were it not for the roadside billboard advertising the turnoff. The promotions spare no effort to inform that, yes, this is the worlds highest commercial bungy jump, doubters being free to look it up in the Guinness Book of World Records.

Hard core bungy junkies flock here from all over the world in order to do the big one. In the course of their 8-year operation, Face Adrenaline has helped over 70,000 jumpers overcome their primal fears of heights and falling, including an 88-year old, the current age record holder. That works out to be an average of about 20 jumpers per day, seven days per week, more coming in the warmer summer months of December to March. Of course members of the Face Adrenalin crew have jumped multiple times and Werner, my personal jumpmaster, claimed to have gone over the edge a total of 48 times. In attempting to set some kind of bizaar marathon record, I was told that someone recently had made 101 jumps in a 24-hour period.

Most folks like me, though, are satisfied to go through the stomach churning experience and savor the post-bungy high that can last for days once. Even though I had done a much smaller jump in New Zealand 14 years ago, I wasnt sure about this one beforehand. Having read about it, I had allowed myself the possibility of a last minute back down, free of a self-imposed mental whip lashing, if it proved to be too intimidating.

Just getting to the jump platform at the middle of the bridge can start playing with your mind. The enclosed walkway under the road has a see-through metal grating floor  a disconcerting prelude that most jumpers are not expecting. Theres even an option, for a fee, to just take the walk to the middle of the bridge. For the complete Bloukrans experience, though, I opted to walk back after my jump, while taking the quicker and slightly scarier Flying Fox on the way over. A new innovation installed just 1 ½ years ago, this additional thrill attraction consists of a steel cable that has been strung at a slight downward angle from the bridges abutment where it meets the edge of the gorge, to the jump site in the middle. One is outfitted in a body harness, attached to the under side of the cable, and sent over the gorge on a feet-dangling 25 mph ride which, as happened in my case, can spin you backwards. 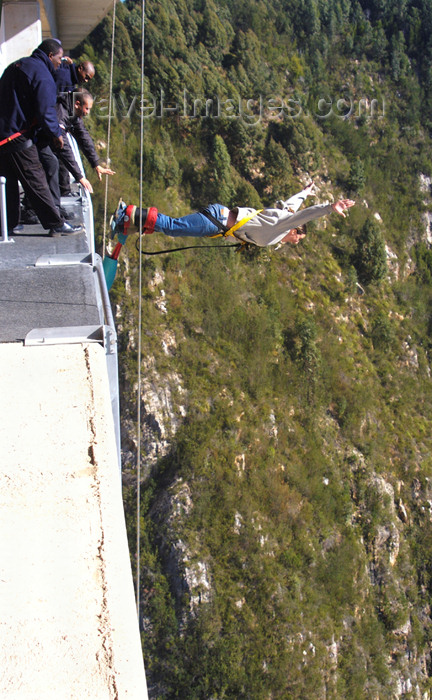 Blaring from loudspeakers, rock music greets newly arriving jumpers  anything to take the mind off the real reason for being there. A crew of 8  10 Face Adrenaline personnel handles the logistics of readying each jumper and preparing them both technically with the harnesses, buckles, karabiners and ankle wraps, as well as emotionally with the heavy mental burden that most jumpers have some degree of difficulty overcoming. Surprisingly though, I was told that only about 1% back down at the last minute, from which there is no refund of the $90.00 jump fee.


I can hear, but am not listening to Werners motivational pep talk above the wild beating of my heart and it rings hollow as two other technicians bind my ankles and fit me with the harness. Check One Check Two  Check Three they call out as each component is put into place. Then the final CLICK is heard, signifying that Im attached to the bungy cord. The two technicians, who are tied to the bridge by safety lines, carry me under the shoulders to the edge - slightly worn, I notice, from all the foot traffic. I compose myself for one brief moment, for what Im about to do defies all logic and doesnt register with the brain. Then, feeling only a light touch on one shoulder from a crew member, in a loud, unison they both call out what has become the traditional bungy count down. FIVE FOUR THREE TWO ONE BUNGY!


The free fall last for five seconds during which a speed of 120 mph is reached, followed by an additional three seconds of bungy stretching and slow deceleration to a stop. The first of the 4-5 rebounds returns you to the height equivalent of the 440-foot Victoria Falls bungy jump over the Zambezi River - an awesome jump in its own right.


Unlike some bungy venues which lower you to a waiting dingy on the river below after youve stopped bouncing and are hanging helplessly upside down, at Bloukrans a crew member is dispatched down a separate cable line, whereupon you are righted and slowly hoisted with him back up to the top of the bridge, allowing the opportunity to contemplate the all-encompassing void  this being the most disconcerting part of the entire experience.

The perception to spectators is that there are tremendous forces jerking you around during a jump which can wreak havoc on the back and spinal cord. The Bloukrans jump, Im happy to say, employs state-of-the-art bungy technology that allows the jump to be  at least physically  stress free. The bungy cord is actually attached to the opposite side of the bridge from where the jump begins. This facilitates what is known in the bungy world  as the pendulum effect which, in addition to helping smooth out the ride, also mixes in a lot of back and forth swaying amidst the up and down bouncing.

Ive met people who have parachuted out of airplanes, but who draw the line at a bungy jump. Each of us has his or her own personal challenges and mental objects to overcome in life, which is what bungy jumping is really all about. Some may think of it as an unnecessary risk and thats OK because risk taking comes in many forms and means different things to different people. And thats just how it should be because without risk there can be no progress  personal or otherwise.

Face Adrenaline operates the Bloukrans Bridge jump site, as well as a much shorter warm-up site called Gouritz, just down the coast and their Internet web site address is www.faceadrenalin.com. A short 1-minute video clip of an actual jump from the Bloukrans Bridge can be accessed at www.mydeo.com/videorequest.asp?CID=311.